Following on from the traditions of coastal Scandinavian fishing communities, Storm Gatherings have become a means for like minded paddlers to get together and celebrate a fruitful and rewarding summer on the water. When grain, dried meat and salted fish in the village store reached a quantity that could sustain the people for the coming winter, a big party would be held.

Now that the summer is over in the UK we kayakers have a similar celebration. We get together to compare stories, exchange tips and skills, then wash it all down with a healthy glug of ale. UK Storm Gatherings take place in different venues form one year to the next. Wherever the venue, excellent paddling is always followed by unparalleled partying.

This year’s venue was the Anglesey Outdoors Centre and the organizer was the eminent Dr Mark Tozer. 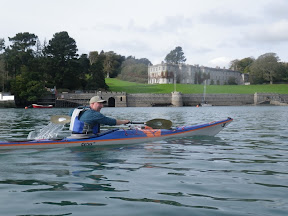 A couple of days before the event, I launched onto the Menai Strait to have a bash at the Menai Challenge. Although not record-breaking, my time of 1 hour 52 minutes and 49 seconds was deemed “quite respectable”, by the challenge creator, John Willacy.

On the eve of the Storm Gathering I met with Tim (who had arrived a day early) and Paul Kuthe who I had met off the ferry the previous evening. 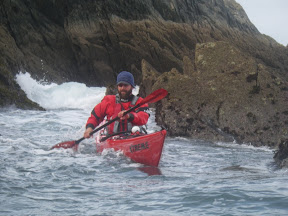 We paddled the rockhopping coast between Bull Bay and Porth Wen. Just as we set off from the bay, channel 16 crackled out the words “securite, securite, securite” which preceded a gale warning. Our coast was relatively sheltered but there was plenty of swell to make the rockhopping excellent. When we arrived back at the centre we found people were already arriving.

This meant that it was time for me to get organising the evening entertainment. With the help of Barry Shaw, Andy Morgan and Roger Chandler I organised a series of short films and slideshows in the main centre so that there was always something happening as folk arrived. 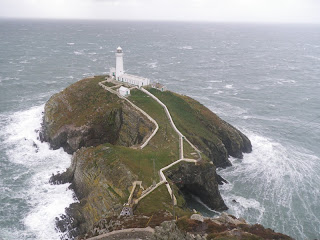 On Saturday Morning the gale was still raging from the south. Brave paddlers emerged from Trearddur Bay and peered into its teeth. I conspired with Greenland expert Martin Rickard to head north and hide in amongst the rocks that I had visited the day before. 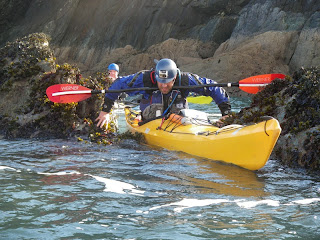 Anglesey’s north coast proved an excellent choice once again. Rockhopping is not only good participation sport but doubles as an excellent spectator sport. The few reluctant barnacle dodgers were soon bitten by the bug. 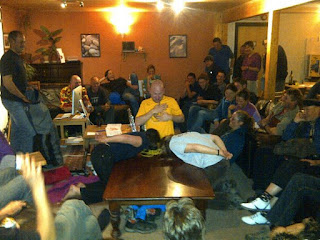 The evening descended into chaotic rapture when Kate Duffus and Justine Curgenven competed for various items of kayaking equipment whilst bound and blindfolded. The ultimate item was a pair men’s long johns.

The paddling on Sunday was a little subdued but no less fun. It was difficult to feel motivated to go the the evening slideshow by Jeff Allen. However, his account of the record breaking circumnavigation of Ireland with Harry Whelan was a real eye opener. 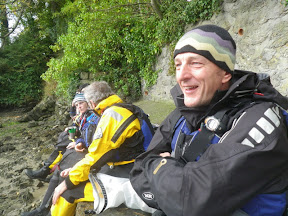 Sunday was wind down day and with a southeasterly force 9 on the forecast I took my group to the Menai Straits. During the rest of the week there have been a number of BCU courses held and Facebook has been ringing with various chimes of ‘I passed!’ What A terrific event!

Bar Harbor to Jonesport and Back – Maine 2011