The swell forecast for Monday, December 28th 2009 was 16.5ft @ 16 seconds. At least the wind forecast was more favorable (NNE 5-15kts). We (Dan, Dave, Thomas and myself) left Drakes Beach for a trip out to Point Reyes lighthouse at 10am with overcast skies and an air temperature of 53degrees.

Point Reyes is the windiest spot on the US Coast and the second foggiest. Winter time is perhaps the best time to kayak out to Point Reyes. The average temperature is only 5 degrees cooler in winter and it is normally much less foggy and windy than the summer months. Of course winter does bring with it big swell and this was what we had to contend with on this day.

The headland of Point Reyes sticks out like a raised fist to the Pacific swell. Unique in its geology and ecology, it is the jewel in the crown of marine national parks that adorn the coast of California. Point Reyes National Seashore includes Tomales Bay and Drakes Estero, both wonderful places to explore by kayak, but for the more adventurous, the lighthouse perched precariously on the crumbling granite cliffs is a ‘must see’ from the cockpit of a kayak.

Punching through a solid three foot surf on Drakes Beach woke us up for the 2 mile paddle south across Drakes Bay to Chimney Rock. Suitably warmed up we gave the huge waves breaking on barely submerged reefs a wide berth as we swung west to follow the line of towering cliffs that would lead us to the lighthouse. Every golden sand pocket beach is occupied by elephant seals this time of year, the deep guttural call of the males an acoustic match to the booming surf.

The myriad of wave carved stacks, arches and enticing gulleys makes this section of coast a rock gardening heaven, but the powerful swell determined that we could only be spectators to the death throes of the waves that pounded and pummeled the reefs, whilst elephant seal pups slept soundly just feet from the carnage.

Another two species of pinnipeds make this inhospitable two and a half miles of coastline their home. Common Seals occupy a rather stony beach and California Sea Lions seem to have drawn the short straw, making do with granite boulders and a large, dark cave awash at high tide. Their constant noisy protests just add to the cacophony of wind and waves. Soon enough the lighthouse adds man’s endeavors to the mix. Built in 1870 and retired in 1975, it provides one of the best viewpoints to watch the migration of gray whales (unknown to me the southward migration had started and several whales were spotted that same day). 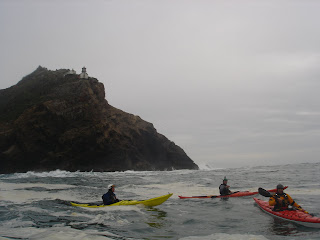 For us it was our turn-around point. There was little prospect of landing on Point Reyes Beach which stretches some 12 miles north from Point Reyes towards Tomales Point without any break in the pounding surf.

For a while the swell seemed to have subsided as we retraced our route back to Chimney Rock, encouraging me shorewards in a vain attempt to find somewhere to play in amongst the reefs. And then, just before I got too cocky a huge rolling monolith reared up behind us and as the crest feathered, we slid of the back, getting showered by spray just before the 20ft wall of water pitched over in a perfect barrel and exploded on the now exposed rocks. Even well outside the break zone, swirling boils indicated hidden rocks that had the potential to cause the biggest waves to collapse with little warning and I stayed alert looking over my right shoulder trying to judge if any wave had evil intent.

Finally we reached the fringing reefs at Chimney Rock and I just couldn’t resist the temptation to pass as close as I dare to the rocks now exposed by the fallen tide. The others were more prudent and swung out wide only to have a rogue swell rear up behind them and give them a exhilarating few moments. Disappointed at not getting a decent surf ride myself I turned and punched through the walls of whitewater rolling around the corner of Chimney Rock and succeeded in getting a couple of good rides as well as a bit of rescue practice as the others joined in!

After a spot of lunch we followed the shoreline back to the put-in, enjoying some surf zone practice in the growing surf as we worked our way NE trying not to disturb the slumbering elephant seal behemoths looking like huge black boulders on an otherwise sandy shore.

In my humble opinion, the paddle to Point Reyes from Drakes Beach is one of the best in an area that offers some of the finest sea kayaking in California. I hope to be offering guided trips throughout the Point Reyes National Sea Shore, as well as the Golden Gate National Recreation Area in 2010. Please email me if you are interested in learning the knowledge and skills necessary to explore these areas safely by kayak.

You can see my photos of our day on the water and the spectacular sunset that followed by visiting my Flickr page.

Lots of P&H boats at the recent ACA certification in Charleston, SC. This was my first chance to try out the Cetus LV. It was fantastic. I didn't even take my 3 pc Explorer off my truck

A wintery return to the cockpit

Well this short paddle was just the second since surgery on my back, the first was a chilly night paddle and this one was in 6 degrees of frost and around 8cm of snow……

We started at 0700…. in the dark with frozen fingers & toes, I slipped into the cockpit and remembered I still had my wellington boots over my drysuit…… a tight fit but workable 🙂
The sunrise made the effort worthwhile…..

Some areas were starting to freeze over, this little fishy will not be getting any bigger, I think his name is Findus…

The chocolate dispenser on the foredeck was frozen, as was the skeg 😉

This is the end of our little outing, what a great way to start the day

As you can see, the end markers on my Cetus are still attached, The decklines & elastics were frozen solid…..

Have a great Christmas, and remember, the best cure for Christmas blues is…… to paddle

The Cetus awaits it pilot…..