A sea kayaking day trip along the Yorkshire coast between the seaside town of Filey and South Landing at Flamborough Head from Jim Krewiecki. 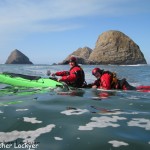 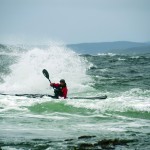 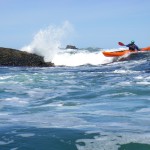 This is a DVD produced by two sea kayaking experts who have organized countless pioneering expeditions worldwide. The cover boasts nearly 4 hours viewing time, which at first sounds a little overwhelming. However, the viewing is broken down into 7 chapters and the DVD’s format and clear layout make it quick and easy to access the content.

Each of the chapters contain a series of bite-sized articles fronted by Nige Robinson, Olly Sanders along with a whole host of other sea kayak expedition experts that make guest appearances throughout. As well as simple but detailed advice, there are excellent anecdotes and inspiring footage from recent forays to far-flung corners of the world.

The sections on kit and planning are excellent but less obvious issues such as psychology, morale and team selection (which are often forgotten) are dealt with particularly well.

It could be said that some of the filming for this DVD could have benefited form a higher level of production. However, it is important to remember that much of this was filmed ‘on the hoof’ during recent expeditions. In any case, top tips and information crucial to planning your next expedition come across well.

Watching DVDs can never replace going on a training course or attending a symposium seminar or workshop, but this DVD brings valuable knowledge hard-won by extensive experience, into the comfort of your living room.

Copies of the Expedition Skills DVD can be bought direct from ‘Rock and Sea Productions’ or your local canoe and kayak store.